A letter we received from one of our residents:

Has a day ever ended not as you planned? Have things ever been out of your control? Well, my “bad” day included CPR, Defibrillation, and the Florissant Fire Department. March 22, 2007 started with dropping my girls off at school and off to work. I had developed a very bad headache but I needed to attend a meeting at Sacred Heart Church. After work, I grabbed my girls from my sister’s house and made my way to Sacred Heart. I remember making my way with my daughters into the meeting. Here is where my day ends not as planned…… I was told that I passed out on the meeting table. Dana & Diane, both nurses, knew immediately I was in trouble. They told someone to call 911 & they got the kids out of the room. Dana started CPR compressions and Diane would do the breaths. They knew that CPR was the only thing that was going to keep me alive until the Florissant Fire district could arrive. When the Florissant Fire District paramedics arrived, they quickly made their way to me. The paramedics took over with Dana & Diane helping in whatever way they could. I received an IV and was quickly intubated. The Florissant paramedics then used their defibrillator to get my heart out of Ventricular Fibrillation (V-Fib). Unfortunately, it didn’t work. So, the defibrillator was used one more time by the Florissant paramedics. Luckily, my heart beat was restored to a normal rhythm. I was still not breathing on my own but I was stable enough to be transported to the Christian Northwest ER on Graham Road. This was all done in about 12 minutes after my Sudden Cardiac Arrest. The ONLY reason I’m here to tell this story is due to Dana and Diane starting CPR and the quick response of the Florissant Fire District paramedics. Only 7% of sudden cardiac arrest victims survive. It is paramount to keep our Florissant Fire District top notch. The Florissant Fire District is one of the links to keeping our citizens, businesses, and homes safe. The Florissant Fire District is asking us to vote yes on Proposition A. By supporting a .40 cent on $100 assessed evaluation increase, it will be about $6 per month per home. This money will be used to continue the current level of service offered by the district which includes compassionate billing, transporting to 5 hospitals, fuel, maintenance of all district vehicles and equipment. It will also be used for training classes for employees to be kept up to date with the latest and greatest changes in medicine and fire tactics. The Florissant Fire Districts last increase was November of 2000. I know my family’s “unplanned” day could have been much worse if it wasn’t for the top-notch service I received from the Florissant Fire District! I owe my future to these individuals. I have had 7 more anniversaries with my husband. I have seen my oldest daughter start high school and my youngest will join her next school year. I have also met my 2 nieces and nephew. Without the wonderful service and care I received from the Florissant Fire District, these things would not have happened! With your support of Proposition A, your family and mine can continue to have the peace of mind that our Florissant Fire District will be there in a timely manner with the best equipment, and best trained employees!!!!

My 2014 selfie during my many jogs in Florissant. 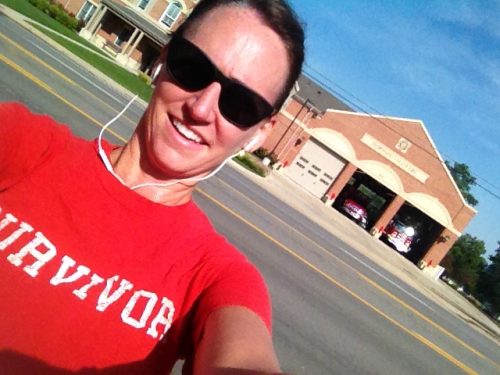