The Florissant Valley Fire Protection District has many outstanding employees who excel in many different areas. We are truly privileged to have among them Captain Jason Hoevelmann, who assumed the role of the district’s Training Officer in 2012 and embraced his role to incorporate more “next generation” aspects of firefighter training into the district’s training regimen. Captain Hoevelmann is also a proponent of professional development and has established many programs for those “coming up the ranks” to be prepared for the next level in their progression as firefighters, engineers, and potential officers. Finally, Captain Hoevelmann is passionate about fire ground awareness and firefighters being aware of dangers they will face while fighting a fire. On Friday, April 11, 2014, at the Fire Department Instructors Conference, the largest conference for fire service professionals in the country held in Indianapolis, IN, Captain Hoevelmann was awarded a Fire Service Writers Award for the blogs he’s written for FireEngineering.com and FireEMSBlogs.com, as well as his contributions through feature columns in FirefighterNation, FireRescue and Fire Engineering. “Jason clearly demonstrates the attitude that we’re in this to reach the widest possible audience and educate as many firefighters as possible,” Tim Sendelbach, editor-in-chief of FireRescue magazine/FirefighterNation.com says. “Further, he aims his writing squarely at the most influential role in the fire service—that of the company officer.” We here at the Florissant Valley Fire Protection District are extremely proud of Captain Hoevelmann and are lucky to have him as an officer of the district. Congratulations, Jason! 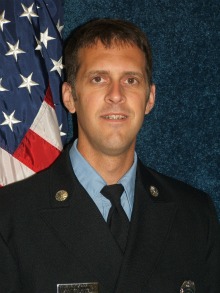